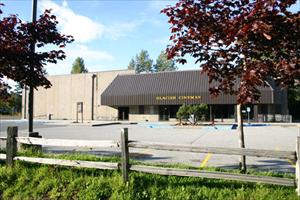 In 1897, Russian-born William David Gross traveled North from Seattle to Alaska among a sea of dreamers who hoped to find their fortune during the Klondike Gold Rush. A businessman raised in a family of tailors, David followed his business acumen through the many opportunities that presented themselves. Working as a clerk became selling his own groceries and supplies, which in turn transitioned to owning a clothing and tailor shop. David followed where demand allowed him to continue his business ventures; as he ran clothing store after clothing store, he fostered an interest in the newfound technology of moving pictures.

In the early 1900s, David invested in saloons and later opened his first theatre with a loan from a dancer, Hansine Campen, the woman he would later marry. While it was not smooth sailing, David and Hansine traveled around Alaska, showcasing moving pictures as they went, including travels through Southeast Alaska, leading to the establishment of Gross Alaska Inc.’s current theatres in Juneau and Ketchikan.

We are proud to still be a part of these communities for over 100 years! The theatres are currently owned and operated by the 4th generation and we are happy to continue the family legacy by providing family entertainment to Southeast Alaska!

Want to join our cast?

Mondays are bargain night at all Gross-Alaska Theatre locations. Admission tickets are just $6.00!

We have movie showings Friday through Monday each week.

Yes! In addition to being able to purchase your ticket online, you can now select your seat. The online ticketing system will walk you through the process to choose your seat(s).

Bring your emailed confirmation/barcode (on phone or printout) to the box office. If you do not have your confirmation receipt, bring the credit card or Gross Alaska Theatres gift card used online to the box office to receive your printed tickets. You may also provide the email used to purchase the tickets to search for your ticket(s).

Yes, tickets purchased online will secure you a seat for the feature presentation. However, it is still necessary to have a printed ticket before entering the auditorium. To receive your printed ticket, please visit the theatre box office and present your online purchase confirmation.

We ask that you remain in your chosen seat. However, if you determine that the seat you chose is not to your liking, you may visit the box office and change your seat.

Yes, you can still purchase your admission ticket at the theatre box office. However, we are recommending customers purchase online. Purchasing online will also give you a better chance at scoring your favorite seat!

Movie titles and showtimes are typically updated weekly by 5:00 PM on Tuesday.

Yes. When you purchase your ticket, both online and at the theatre box office, you will now have the ability to choose your seat(s).

In an effort to keep our employees and patrons safe, we are not accepting cash at this time. However, we would be happy to exchange cash for a Gross-Alaska Theatre gift card which can be used for admission or at concession. Note that gift cards may only be purchased with exact change at the theatre box office.

"No pass" movies are not eligible for discounts or complimentary passes due to our licensing agreement with the film studio. Gross-Alaska gift cards are always valid, regardless of "no pass" restriction.

To guarantee you can get your ticket and favorite seat, we offer the convenience of purchasing tickets and reserving your seat online. To ensure we can maintain this service for our valued patrons we charge a small fee per ticket. The charge per ticket is displayed in the Order Summary which is shown on the right side of the screen during the purchase process. The convenience fees cannot be refunded.

Gross-alaska gift cards can be purchased online or at the theatre box office during business hours. Please email the corporate office to make an appointment as we have new COVID business hours.

You can check the balance of your Gross-Alaska gift card by emailing Gross Alaska Corporate at corporate@grossalaska.com. Please provide the 10-digit number found on the back of the gift card in your email.

Yes, gift cards can be used to purchase tickets online. Only one gift card per transaction is allowed and the remaining balance can be paid by a credit card.

Yes. The Juneau Glacier Cinemas and Ketchikan Coliseum are open Friday and Mondays beginning at 6:30 PM and Saturday and Sundays at 3:30 PM.

The 20th Century Theatre will not be opening at this time.

The Gross-Alaska corporate office is located at 222 Front Street, Suite 600 in downtown Juneau. Please email or call us at 907-586-3634 to schedule an appointment.

Please call our corporate office at 907-586-3634. You can also email us with a description of the item and details about when it was left behind/lost.

Yes, the theatres are available for rental. Please contact Kenny Solomon-Gross, VP of Operations at (907) 586-3634 or by email.

To be considered for donation of movie passes for charitable purposes, please email the request on your organization’s letterhead, or mail it to the Gross-Alaska corporate office at 222 Front Street, Suite 600, Juneau, Alaska 99801. Once a request is submitted, it will be considered. A donation is not guaranteed.

Gross-Alaska is always looking for friendly, hardworking, and dependable individuals who enjoy movies and customer service. Submit an application online or apply in person at any of our locations.

Gross-Alaska Theatres has invested in a reserved seating system, allowing patrons to choose their seat(s) prior to arriving in the auditorium.

Assistive Listening Devices are available at all Gross-Alaska locations for visually impaired patrons. Ask at the box office for assistive listening headsets, audio description headsets and closed captioning devices. Please note that not all movies are compliant with closed captions and/or audio descriptions.

Sensory sensitive movie showings are especially for children with sensitivity to light and sound to enjoy their movie theatre experience in a positive and accepting environment. The sound is low, the lights are up, and children can move about the theatre. There are no ads or previews shown, and parents can bring gluten-and casein-free snacks.

ALWAYS BE IN THE KNOW

Subscribe to Glacier Cinemas email newsletter to receive updates and event notifications. You don't have to worry, we'll respect your inbox.